A log house was advertised in the local paper for sale with the provision that it be moved. Mom and Dad investigated, measured, okayed it, and bought it. The six room house was superior to the original log cabin. It had a chimney on each end, and a tin roof in fairly good condition. Dad's grandson-in-law, Troy, was out of work, and commuted from Birmingham, living with them during the week. In the spring and summer of that year they moved the logs, laid them, and put a roof on each side. Mom was ecstatic as she watched the house take shape, but she would have to wait for its completion. First came the general store, meeting house, and log smokehouse.

When Troy left for a job in Birmingham, Dad found someone else to help. A neighbor named John was retired from his job for medical reasons. He, like Dad, was a workaholic. He helped build the general store, chapel and log smokehouse. With those projects complete, they turned their efforts to completing the log house. 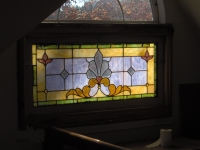 Upstairs are two bedrooms and a bathroom. The bathroom was cleverly squeezed into the eaves of the house. One non-traditional addition to the house was a beautiful stain glass window. It was added to the gable on the front of the house.

The best place in the log house on a warm summer's afternoon is the porch. It overlooks a native flower garden that takes up most of the front yard. Hanging on the eaves is a hummingbird feeder. Mom and Dad find it very rewarding to watch these tiny birds battle for control of the nectar.

When the log house was roofed, Dad found a picture of a turn-of-the century general store and wanted one just like it. Mom and Dad had a huge collection of store merchandise and displays. Much to Mom's chagrin, work on the log house was put on hold. Dad and John cut the trees, dragged the logs, and got a portable sawmill to come out and cut the lumber. Dad drew the plans and they built his store. John used his blacksmith skills to forge hinges to match the picture for the shutters above the porch. Dad and John also forged a strong friendship.

After completing the main body of the store, it was evident that it wouldn't hold all of their collection. Dad and John built an addition to the store. The addition allowed him to display a complete 1930's post office and a feed store. 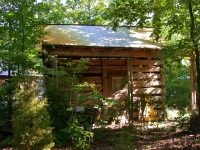 While reconstructing the walls of the log house, it was necessary to buy some logs to replace damaged logs. The leftover logs gave Dad the idea to build a traditional log smoke house for the salt log. Instead of building the smokehouse around the salt log, a large door was cut from one end. A porch was added to the front for the scalding pot and an add-on shed was built to house the doctor's buggy.

Needing a place to display the school desks, old readers and church pews they'd collected, Dad designed a meeting house. Like meeting houses of old, it was designed to be both school and chapel, down to the authentic school bell in the steeple. 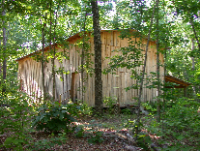 Even with the village almost complete, Mom and Dad still had items they had been collecting with no home. From the beginning, John had encouraged Dad to build a museum. Although there were still piles of lumber from previous sawings, John and Dad needed more. Dad's plan for the museum would make it the second largest building in the Village.

The original ten acres had been expanded. Dad and John scoured the property and judiciously cut trees and hauled them for sawing. A portable saw mill cut the boards. With lumber cut, they laid out their plans and built the two story museum behind the log house. Mom and Dad moved most of their collections and put them on display.

Dad also built a handy lumber shed on the back of the museum to store the various sizes and lengths of lumber they had left. After the salt log was moved, the old smokehouse was put to use storing the various windows and doors collected. Two other small storage sheds and a small guest house were also built, although at this time the guest house is being used for storage.

Recently, after a long day working on the Village, Mom asked Dad, “Accomplish much?”

He stood there and thought for a moment before replying, “More than most.”

On 20 December 2010, Dad passed away. He died two hours before the lunar eclipse. A friend said in ancient times this would have marked him as a person of magic, as even the moon mourned his passing. Those of us fortunate enough to touch his life know that his magic lay in the love he had for his family and friends and the love they feel for him.